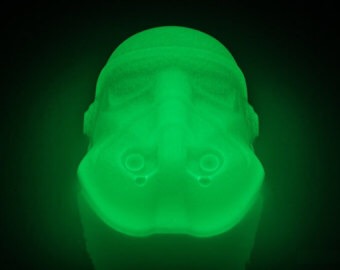 At five years old, I found two things particularly compelling: Getting free stuff, and Star Wars. Having achieved some level of literacy, I noticed that the latest issue of my favorite periodical, the Kiddie City catalog, featured a discounted, non-trademarked, Stormtrooper-ish helmet. And–get this–it GLOWED IN THE DARK!

Although I figured I had a 0% chance of acquiring such an item during the nonbirthday/nonChristmas season, I nevertheless asserted the necessity of this item to my dad. Cranial protection and light, I argued, were key to my success as a child.

(Actually, I probably pointed and screamed; but I feel the need to exaggerate my intelligence for narration purposes that will soon become apparent.)

To my delight, my dad capitulated, and soon I was rummaging through the Kiddie City discount bin, trying to find the helmet with Vibe (and that also featured a functional elastic band to secure it to my small skull).

After locating what appeared to be the only one that met my specifications, I handed it to my dad. I wore it all the way home, filled though it was with Winston smoke that failed to exit the (allegedly air-cleansing) triangle window of the duct-taped station wagon. Was I sick on carbon monoxide, or giddy about getting home and retreating to the darkest room in the house?

I was both. And I ran wildly to the half bath with no windows and a kickass mirror.

“Okay, I’ll turn the light on and pretend I have to pee,” I strategized. “Then, I’ll close the door and shut it off.

I killed the switch. The helmet was beautiful, lighting-bug-butt-colored, but not on my head.

Suddenly my world was green, and the mirror presented a demented glowing monster through my armored face. “I must sit and ponder this visage,” I reckoned.

I shall not soon forget the unpleasant sensation of an unplanned toilet-water soaking.

The splash and scream inevitably drew a laughing crowd comprising my most beloved human beings, my family. They had discovered a toddler who had fallen into the toilet.

(An admittedly hilarious sight (in retrospect).)