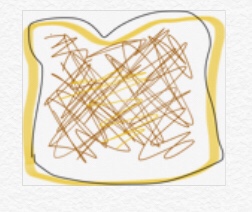 Perched on the uncomfortable stool at the corner pub, with several IPAs in my belly, I broke from tradition and ordered a grilled cheese. I had passed up many of their creative (and, at times, difficult to pronounce) weekly gourmet recipes. But “fresh” Vermont White Ceddar and mushroom on sour dough was irresistible to my beer-addled hypothalamus.

It was delicious; and, on an admittedly rare occasion during which I was strategizing about work (specifically, how to remind coworkers of my existence after my recent move to the isolated second floor), I ordered six more that I would share with my fellow employees the next day.

After some haggling (and mild discouragement via my wife), a logistical discussion ensued. The chef could not fathom my serving his creation after it sat in the refrigerator over night. And so, I agreed that he would partially cook the sandwiches, and I would prepare them in a toaster oven the next day (per his instructions), with a delicately generous discount.

After waking up too early, I remembered: My office has no toaster oven.

Laptop on my back (and toaster oven under my arm), I sauntered to my Saturn to drive ruminatively to Broomall. What was I thinking? Social interaction?!

No, that’s just what they’ll be expecting. Um.

>> Did you know that my best friend’s name was Stacy? 🧐

Learning curve flattened, I had a delicious sandwich in hand. I would head toward the first cubicle on the left. Old stomping ground.

“I brought my lunch,” said my first choice.

“Free,” I offered. We decided he would eat the last one if necessary.

The youngsters appreciated the meal. Mostly, though, I was looked upon with suspicion and faced uncomfortable rejections of my awkward politeness.

“I don’t like mushrooms,” was most sincere. “I will throw up.”

I had to sell it. I said there was no ulterior motive. I was an innocent character in this strange story.

The first guy ate the last one. I fantasized about my random act of kindness. It was time to write again.