Living in the shadows of Rudolph’s stable (and the shadow of his persistent seasonal achievements), Spiderpat finally receives his calling. 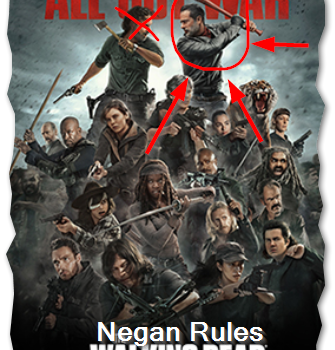 (Spoiler alert.) ​Okay, let’s talk about The Walking Dead. After some contemplation, I’m rooting for Negan.

Considering that TWD occurs in a post-apocalyptic universe, Negan’s modus operandi has fostered the closest thing to the reconstruction of civilization that we’ve seen. Though his methods seem harsh, the “post-apocalyptic” characteristic of this world warrants a lot of consideration. If the survivors are starting from ground zero after the destruction of what we currently know as “civilization,” there are many profound questions at hand. Perhaps the biggest is, “Where do we go from here?”

Negan has named his group “Saviors” because “we save.” This is one part propaganda and one part truth. The truth is that Negan could not have built his enclave without valuing lives. These lives take on the purpose of growing and maintaining the Saviors. In turn, the purview of the Saviors—at least before Rick and his group came along—retained a level of stability that allowed the vestiges of pre-apocalyptic culture to survive.

END_OF_DOCUMENT_TOKEN_TO_BE_REPLACED

In the year 2000, I existed in an odd office environment. They had “gamified” the culture in the mold of the new CBS reality TV show, Survivor. I was almost 100% non-TV oriented, and was unaware that the essence of what they were aping would eventually morph into such an pleasurable part of my leisure time.

Co-workers would receive an “immunity idol” during our weekly meetings. I never was the recipient of this cheesy award. In retrospect, given the ambiguity of the actual professional workflow (this was, after all, a “management consulting” company), this probably meant that you were literally safe from getting your ass fired.

After my humiliating and baffling “layoff,” I figured maybe there was something to be learned. Perhaps I was a bit hasty in my dismissal of such pop culture tomfoolery. So I started watching Survivor during season 2, the Australian Outback. I have faithfully watched ever since.